Before I get into the detail of what I’m doing I ought to be clear – this is not a tutorial in model railway wiring.  If you’re looking for one then I’d suggest reading the excellent work by Brian Lambert.  This post is going to be looking more at how I’m building the layout.

This is a topic that I think I’ve touched on previously, around DC being the old analog control method for model railways and DCC being the modern data basic digital method.  In the ideal world I’d like to build a DCC layout and initially when I started planning the layout that was were I was aiming towards, with possibly the ability to switch over and run the odd DC loco if necessary using my older controller.

Despite DCC not requiring separate wiring blocks I still built the layout with around 15 different wiring regions.  The idea behind this is that I if I want to be able to then I can add train detection into the blocks in the future for automated running.

The closer the railway came to completion the more obvious the issues around DCC running became.  Firstly, of the 25 or more locos I have only 2 had a DCC decoded fitted, and one of those was only because I bought it to be my DCC test loco specifically.  I’ve another 3 or 4 that will take plug in DCC decoders which have ready and waiting to go, but to date not fitted.  Beyond that the rest of the locos are all DC and would require decoders to be directly fitted to them.  This is a lot of work, not to mention the expense for all the decoders.

The second issue I’ve had as been getting the Sprog DCC controller working reliably in a setup I’m happy to use regularly.  The Windows 10 laptops don’t like it, the old Windows XP desktop runs but is overkill for the need, and the Raspberry Pi worked fine the first time (details of the build here), but the OS corrupted and since I rebuilt it then the Sprog has not be reliable.

So the result is that I’ve taken the decision to add a DC style control panel to allow me to control the layout and to switch each wiring region between DC controllers and also DCC control for the future.  So the decision to wiring in blocks has proved a very good one.

A previous post shows the construction of the control panel, and my aim is for the next post to go into more detail about the wiring of the panel and how it interacts with the layout.

Since the main section of the layout is two loops then I’ve wired these as a single zone, however with the separate segments so that I could do train detection later.  For both loops there is effectively a bus that runs underneath the layout mirroring the track.  This means for each segment it’s a simple case of attaching droppers to the track and then connecting into the bus.

In order to allow the future occupancy detection then I’ve added a little more complexity up front to the bus connection so that at some point in the future it should be simple to break the connection and add the detection circuitry (assuming I ever get there!).  This basic consists of a 6 way choc block of which a couple of the connections are looped straight through for now.  In the future the loops can be removed and new capabilities added. 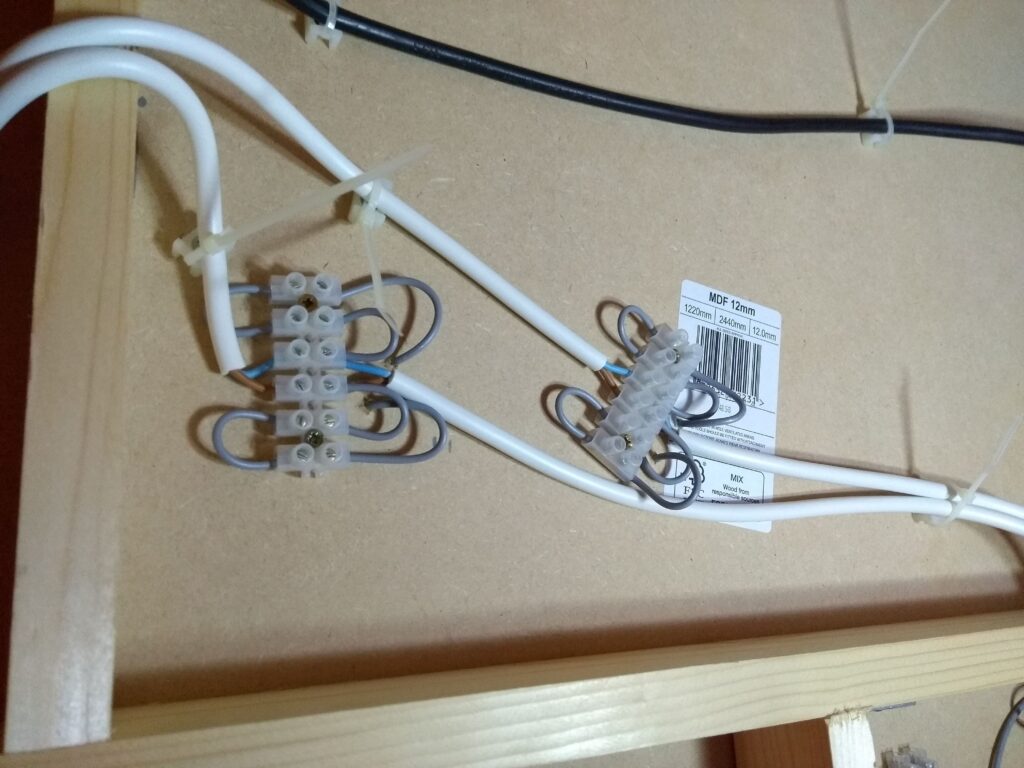 For the sidings and other areas that are not on the main bus then I’ve used the same choc block approach, however they are simpler in that there is no loop on to the next section of track and will just go directly back to the control panel.

In a future blog post I’ll probably touch on how I’m implementing control of switching the points.