One of the side effects of the snow this morning  was that I picked up the camera when I went out to take some photos of the snow.  As a result I took the opportunity to do something I’ve been meaning to do for a while, and since I’d got a better camera than the one on my phone it seemed an ideal opportunity…

Back in May 2013, not long after I started the blog I posted some photos of Television Centre and the fact that it’s refurbishment had started.  This is a building I worked in for a number of years, and continue to wall past on a regular basis on my way too and from work.  My intention had been to post photos of the changes as they went along, however as with so many good intentions I never got around to it.

So having the camera in my pocket this morning it seemed a good opportunity to take a few.  Obviously I can’t get into the site, so the photos are what I could see on my way past walking down Wood Lane, however the do show the scale of work that is underway.

A large amount of digging work appears to be talking place across the site.  In some places, like the North Gate and around Stage 6 this appears to be for new services and one assumes connectivity for when BBC Worldwide moves back in.  However elsewhere across the site there appears to be digging going on.  The corner of TC1 and the whole of the offices in the middle of the Horseshoe Car Park appear to have major work going on.

Elsewhere scaffolding has gone up in the last couple of weeks across the front of both the Spur and Stage 5, with similar work on the back as well.  The periphery ring of temporary style offices that was built on top of the studios appears to be being demolished.

Walking past in the dark winter evenings also gives a scale of the work with how many locations have lights on.  Design building, East Tower, main ring all have signs of life in them – however not as much as when the building was in regular use.  It is Stage 6 however that is the most surprising, as the view through the windows appears to show office space that is well on the way to finished.  Many of the final services – air con, lighting etc all appear to be in place now.  This is not surprising since it was one of the first areas for major work to start and one of the first areas that will be occupied.

I do want at some point to go for a wander in the park round the back and see what work has gone on there and hopefully get some more photos.  However in the meantime these show some of the current work in progress. 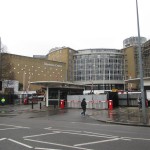 View of the front of Television Centre, with work going on at what used to be the exit of the main gate 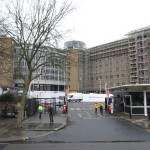 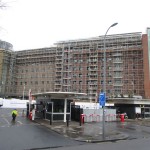 The whole of the Spur and Stage 5 covered in scaffolding. 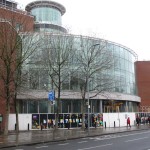 Hoardings at the front of Television Centre advertising BBC Worldwide 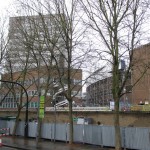 View through the trees showing East Tower still in place, and the demolition of the studio perifferary ring. 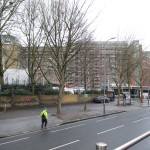 View back towards Television Centre showing the work in progress