Well, once again I’ve failed miserably from the point of view of keeping the blog updated, however I do have an excuse.  We spent most of last year working towards or on building an extension to the house.  As such all of the downstairs has been remodeled and changed, so I had little time to spend in the loft on the railway and therefore not a lot to report.

Now that everything from the extension has started to quieten down (well there are a few small jobs left, but then again in owning a house there are always a few small jobs to do) then I’ve been able to turn my attention back towards the railway.  My focus has been on the control panel in order that I can drive the turnouts and bring the goods yard into use, however I’ll focus on that in another post.  For now I was going to touch on a couple of new additions to the rolling stock…..

Dapol Class 68
The first was a little bit of an impulse buy earlier this year – I saw it and was quite taken with it.  It’s a Dapol Class 68 in the Direct Rail Service compass livery.  Despite being a good looking loco it was as much the name of Avenger that got me (and probably various other people as well).

This is my first Dapol model that I’ve had, and I had to say I’m very impressed.  Yes it’s a expensive top end loco, but even so everything from the packaging through the detail on the model to the operation have been impressive. 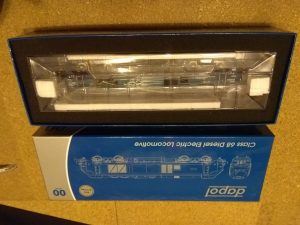 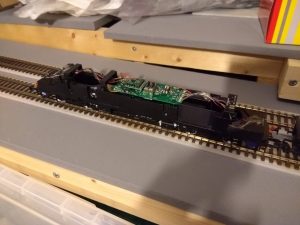 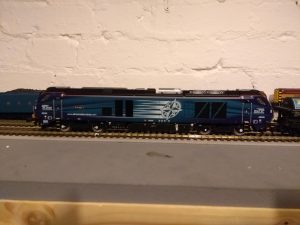 Side on view running around the layout 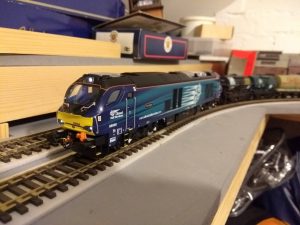 Bachmann Class 66
The most recent purchase was a Bachmann Class 66 in EWS livery.  I’ve been wanting a 66 for the layout for quite a long time and wondering what to do.  This year appears to be a good one for 66’s with Hornby, Hattons and Bachmann all releasing versions.

Initially I was tempted towards the Hornby based on price, however the more research I did the less convinced I was that it was what I wanted.  The Hattons versions due later this year look really interesting, but at a high price point I wasn’t sure I wanted to pay.  However the net result of these does seem to be that the older Bachmann range is appearing on ebay second hand at price points only just above the Hornby range.

The 66 I ended up going for was an EWS livery which is lightly weathered and also has a driver fitted in the cab (32-735).  The weathering looks like and is something that one day I’d like to learn to do.  Some weathering is far too heavy for my liking, but this really enhances the model.  Overall I’m very happy with the model – it looks good, runs well and I suspect it will be out quite a bit among the other EWS rolling stock. 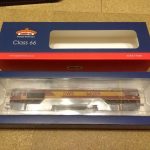 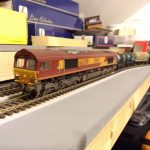 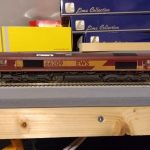 Side view on the layout

As some point when I manage to get some time I really ought to start a page to list all the rolling stock that I’ve got as it’s become a surprising amount.  Certainly the shelves I built above the layout for railway bits are now full and there’s more bits and pieces all over the place….. 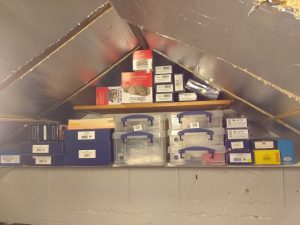