My aim for this year was to try and write blog posts more regularly, and have spend most of the last month off and on trying to write one around some of the work I’ve been doing on the wiring.  Each time I come back to it something else has changed and I have to re-working it.  So while I attempt to wrestle that post into a reasonable shape I thought I’d go with something simpler (and shorter!)…..

In the last month there have been a couple of additions work mentioning to the railway. (OK there have been more, but I’m sure most people aren’t that interested in capacitors and wood.)  The first of these was a new analog controller, of which there will be more mention when I eventually get to the add the wiring post.  This was an ebay “accident” however will hopefully provide significantly more flexibility than my existing 2 channel controller. 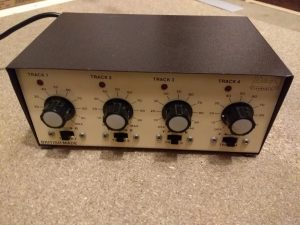 The new controller, as can be seen in the photo above, is a Gaugemaster Series Q controller, providing 4 channels of analog control.  While this is not a particularly new controller, having an existing 2 channel version which has been rock solid then it was a logical choice.  I looked at the newer version, but there’s something nice about having matching controllers.

The other addition to the railway is a selection of 41 trucks to add to the rolling stock.  These were past to my father many years ago by a family acquaintance when their railway was being decommissioned.  Since there is now a layout to run them on they’ve now made the journey from his layout to my loft. 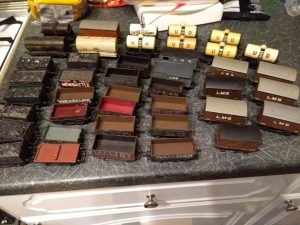 41 trucks to add to the layout

The photo above shows me getting them all out in the kitchen to work out what there was.  I suspect my next challenge is going to be finding suitable storage for them alongside the layout as the amount of rolling stock seems to be growing faster than the layout at the moment!