This is a post that I should have probably put the first part of up a long time ago.  Each time I’ve gone past Television Centre and taken a few more photos I’ve thought to myself “I really must get on and add some of these to the blog”, so finally I have.  This does mean it’s a bumper update covering just over a year of change since the last post.

Over the last year or so the number of times that I’m in the Shepherds Bush area has dropped a lot, so the gaps between the sets of photos are rather random, and in some cases quite large.  This in turn as meant that at times there have been real jumps forward in the progress on the site between one visit and the next.

Unfortunately what these photos don’t show is the scale of work going on all around the site.  Going past on the Hammersmith and City line and the glimpses into the site you get from there shows just how much has changed.  Major chunks of the site have not just been demolished, but new structures are emerging.  Additional floors have been added to the top of most remaining sections of the original structure.  The scale of the project and the speed of movement at times is really quite astounding.

So on to the actual pictures……

Since the last update was in April then a huge amount of work has been done on the site.  The main block now as a new facade that while similar in style to the original has moved from a blue/grey colouring to a bright red.  The new building that is replacing the old Stage 4 (also known as the Spur) and Stage 5 sections of the main building has really started to take shape with new floors every week or so.  The sales office at the front of site (eventually to be more apartments) is open and has had more branding added to it. 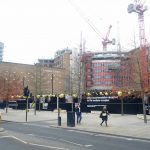 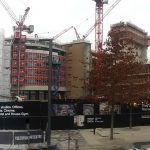 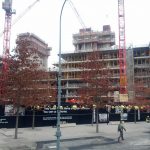 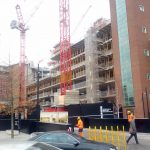 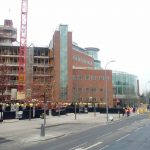 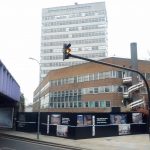 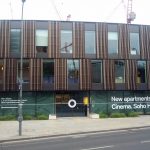 A new year but still work continues on the site, and some new photos on a lovely sunny January morning.  The Stage 4 & 5 building continues to grow floors at a steady rate 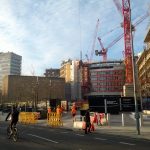 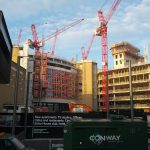 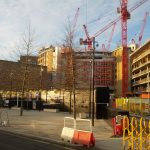 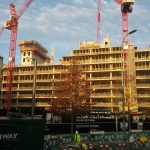 The big piece of news in this update is that work has finally started on East Tower which will result in the demolition and replacement with a new residential tower block.  The surprising thing is how long it’s taken to start this process, particularly since the studios adjacent to it are supposed to be coming into service later this year – probably just as the major construction on the replacement start.  I can only guess that with so much work on site there was limits to quite how much they could do at once. 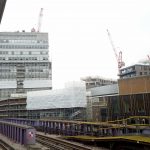 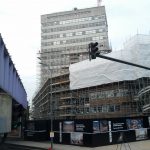 View from Wood Lane showing the scaffolding in progress 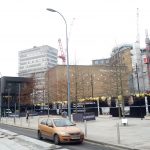 Looking down Wood Lane towards TC1 and East Tower 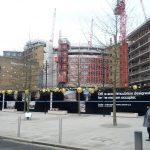 The view of main block 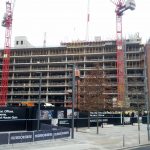 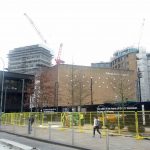 TC1 with East Tower in the background being covered in scaffolding 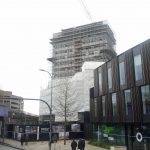 A closer view of the scaffolding enveloping East Tower

And ultimately completely covers the whole tower.  At this point with a tower crane also in place that demolition would be about to start….. 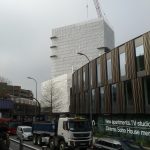 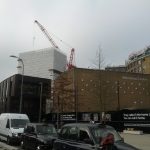 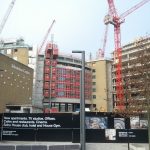 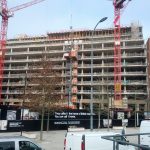 In the two months since the last photo there has been real progress on site.  The new Stage 4 (Spur) & 5 building has moved on a long way, and East Tower has practically disappeared. 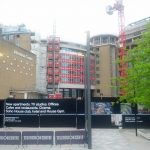 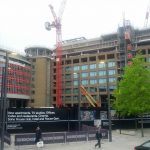 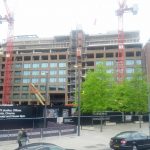 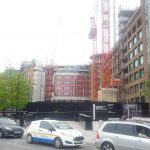 Looking down the length of stage 5 towards the main ring 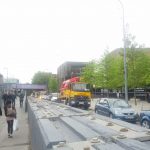 Is something missing here? The view down Wood Lane without East Tower 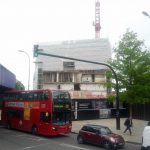 So that brings everything up  to date.  In going through my photos I’ve reminded myself once again that I’ve still not posted all the photos I took a couple of years ago on the last day that TVC was open.  I’ve got photos from around the site including the studios that I really need to sort out and put on here.  Maybe one day I’ll get there….