Today marked a very important stage in the build out of the model railway with the running of the first train(s) on the actual layout.

The last couple of posts (Track Laying – 28th Nov | Christmas Presents – 21st Jan) showed that I’d started working on the track laying and also some of the initial working work.  Unfortunately work stopped for a while just after the last post due to me needing to spend some time on the roof insulation, so it was good this weekend to finally get back up in the loft and make some real progress.

After fixing a dodgy track join (joining flexi-track on a curve was a new experience for me) I was able to spend some time on the wiring.  I think there is just over 12m of track now laid – around half the two main loops – however none if it was linked together to be able to use.  I’ve split the track into power districts (isolated sections of track) which range in length between 1 and 2 meters.  The aim is at a later date to add occupancy detection to drive automated signalling, so it’s important to be fairly granular with the sections.

So the progress today was to get probably just over 10m of the laid track cabled across both loops.  The next sections for both tracks includes point motors, so need more complex wiring to account for the switching, and with the time available I’ll need to tackle them on another day.  However this does mean that I’ve I’ve still got a couple of good lengths to be able to run a train along.

Then was the question of which train to have the honor of being the first on the track.  One from my childhood?  One of the recent purchases?  No, there was a clear choice.  Driven by the fact there was a Thomas mad little boy in the floor below and a recent thank you gift from the previous church of a Percy train then there was only one choice!

The good news was that both lines ran perfectly.  I was nervous as there is a gradient built into the layout to allow the multi-level station/train yard section in the future, so it was encouraging to see a train cope with it without struggling.  Then having tested it was clear that Percy needed some trucks to pull (thankfully not troublesome ones) and then since there were two lines, how about some company…..

The last thing to do was introduce a three year old, so as a treat on his way to bed he was taken in to the loft for the first time and discovered that Thomas and Percy had come to pay him a visit.  The result was better than expected with a very excited little boy enjoying watching two trains running back and forth.  I see that in the coming years he is going to want to spend a lot of time in the loft with the railway so I’m going to need to keep the progress up!

In addition to the video a couple of photos showing the trains on the layout: 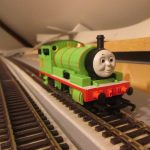 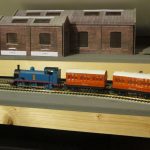 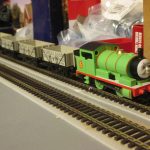 Percy pulling the trucks past all sorts of mess!

And finally (as they say)…. despite my first layout not being completed, I appear to have become an expert on model railways such that I was getting questions for the one my Nephew is starting to build.  It’s encouraging to see a new generation getting interested in model railways as I was when I would young.  So at some point the future we might have to see about some trains visiting the different layouts.