OK it’s now two thirds of the way through January, but since the last of my Christmas presents has now arrived I thought it would be a good time to do a post that shows a couple of the new items along with some other recent purchases.

Christmas seems to have been very focused around the country station area.  Only having found the items that I wished to use late last year then it’s nice to actually have the items in my hands ready for when the layout makes it that far.  The major component was the main station building which is the Granite Station Station Building from their Scaledale range.  I was slightly nervous as my experience of Hornby in the past was very plastic toy style models.  However this is cast resin and a very impressing piece of modelling.  At some point I need to add some interior detailing and lighting, but overall I’ve incredible happy with the main station building.

The other major present for the layout is the Hornby Granite Signal Box from the same range.  This will sit between the station and the crossover junctions, and being part of the same range should match in very well.  As with the station having recieved and looked at the model I’ve very impressed with the quality of it – particularly the detail around the steps which I wasn’t sure how good it will be.  Again I need to add some interior detailing at some point in the future.

So here are a few photos of the presents on the work in progress layout….. 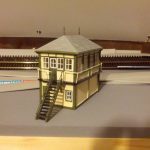 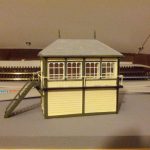 Side view, just needs a layout to go on 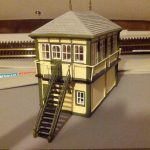 Closer in on the steps 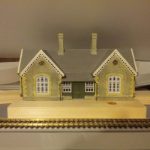 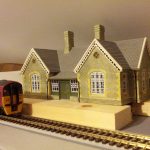 Since the last post work has continued on the layout with the Christmas holiday really helping with a reasonable amount of time.  The main track loops are almost half way through being laid and work has started on the wiring.  The recent achievement is the first point motor is now fitted and tested.

On the wiring the other recent purchase was a couple of DCC boosters.  My primary control system for DCC is currently a Sprog which is only able to supply about 1 amp.  With the size of layout and number of devices to control then this is not going to be enough.  In Hattons winter sale I spotted that they have the Hornby Power Booster at a quarter the original price.  It looks like Hornby have discontinued it, however that doesn’t mean it won’t work for me.  I had been considering building one from scratch, however at this price it didn’t seem worth doing so.

A couple of pictures to finish up with…. 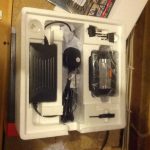 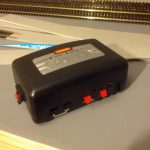 And the main unit out 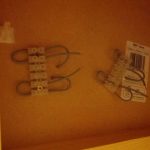 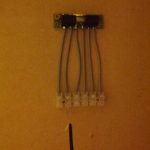 The point motor installed and being tested