The last photo update on the progress at the Television Centre site was back in December, so on a bright sunny April lunchtime I managed to get out and get a few more photos of the progress to date.

From the front there is obvious progress on the work.  The most striking thing is the building in front of TC1 is almost complete.  While the long term plan is that this should be apartments, the obvious has happened and this looks like it’s going to be used as a sales office for the site.

The other major work, which will probably be more obvious next time I get some photos, is that they are obviously about to open up some of the front of the site.  The area where main gate was and all the way across to the front of stage 6 is in the process of being landscaped.  The main hoardings have now been moved further into the site, however there are temporary barriers still in place across much of the area, however it doesn’t look like too long before they’ll also be moved. 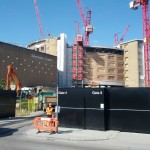 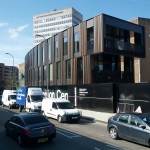 Round the back progress is not as obvious.  Around the main block most of the work is still in the ground so not visible in these photos.  It’s days like today that make me wish I had a drone to be able to get photos and video from above the site, however the amount I’d use it doesn’t justify the cost.

The main thing that is noticeable is that the demolition work has now moved onto more of the lying buildings around the back of the site.  The Drama/Design Block, and EBX are in the process of being demolished now.  This is clearly shown in the photos from Frithville gate where the multi-story car park is now visible across the site.

There is also the start of re-construction work starting to be visible.  New metal work and a section of new external wall has now started to appear around by TC1, which may indicate that a corner is being turned from demolition to construction now. 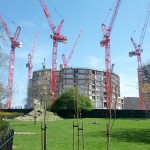 Looking from the park at the main block surrounded by cranes 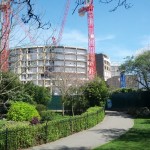 Signs of new construction starting to be visible 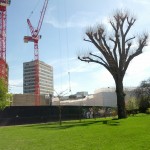 Demolition work underway on buildings at the back of the site 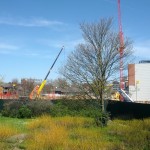 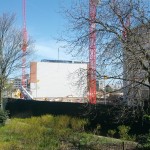 The Spur / Stage 5 gap with work in progress 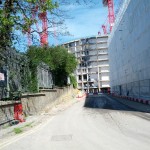 View from Frithville gate back towards the main block 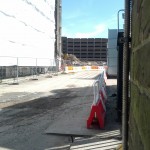 View from Frithville gate through to the muti-storey car park

The one last observation that really surprises me is the lack of progress on the East Tower.  While i suspect that some of the buildings at the base of it are being used as site offices, I would have still expected that they’d want to get on and start the demolition as building the replacement tower is not going to be a fast process.  If you also consider that it is right alongside the remaining studios that are due to be brought back into use from next year then I can’t see how that level of demolition will go together with studio production on the same site.  Only time will tell…..