So here we go, the third of the end of year catch up posts (also see TVC Update and Layout design) which hopefully brings me back up to date with the regular posts on the blog.  This post shows the progress so far on the construction of the main model railway so far.

Work started properly back in early November when I had a week off work and we stayed at home.  This was a good chance not only to catch up on various jobs around the house that needed doing, but also to start the construction work.

The base board is made out of 44x18mm pine as the main frame, onto which will go a layer of MDF (probably 9mm).  The challenge has been working around the roof construction, and also with the various levels.

On the levels side of things, the upper station will be obvious, however the fact that the fiddle yard will run under this station has introduced more complexity.  This means that the majority of one half of the layout slightly drops away from level.  The main fiddle yard which logically would be on the same board as the main line is also separate and drops away slightly more to get the full clearance.  This particularly made for some interesting construction since I couldn’t have what would have been one of the main beams in any other corner.

Working around the roof did present some challenges – I learnt pretty quickly to assume that nothing was straight or level.  There are some places where the layout definitely looks like it’s slopping when in fact it is perfectly level and it’s the roof around as the reference point that is wrong.

Finally, since I need the storage space underneath, I’ve attempted to build the layout free standing.  At the wall end there is a support all the way along, and it is screwed to the beam that cuts across half way along the lot.  However other than that it is almost entirely supported by itself.

So onto the photos…..  These were taken a couple of days before Christmas, so there has been more progress in the last couple of days.  So if all goes to plan there will probably be another update very early next year showing the next lot of progress. 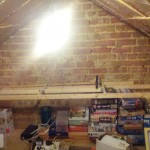 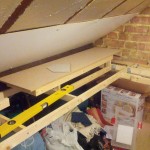 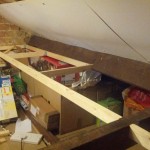 The other side where the main country station will be 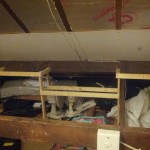 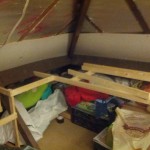