In a classic case of having time to stop and write something, this post is about 3 weeks later that it should have been!  It appears that on Monday 9th Feb (3 weeks ago today) Stage 6 of Television Centre was handed over to BBC Worldwide for them to move into. 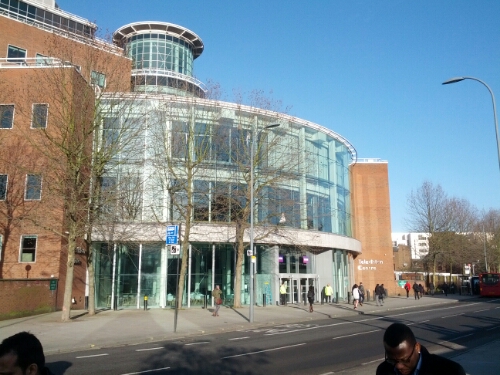 For those not in the know, Stage 6 is the newest part of Television Centre and contains what was the main entrance to the site, as well as previously BBC News.  It always was due to be one of the first areas ready and will become the new headquarters of BBC Worldwide – the commercial arm of the BBC that handles things like books and selling channels or programmes abroad.

From the outside Stage 6 doesn’t look that different, however watching the work over the last couple of years it has had major work done to it.  The impression is that the atrium that formed the news room has been extended down to the ground floor, and the lifts dealing with the level change after reception have now gone, opening it up much more.

This is probably going to be a mixed blessing for Worldwide – a completely refurbished office and being in the iconic TVC, however they are really working on the edge of a building site.  BBC Studios and Post Production who were also due to be back this year have delayed until 2017 due to the extent of the ongoing building work.  With jobs like the demolition adn re-build of East Tower still to go you can see why.  For Worldwide it now appears that much of the structure of Stage 5, which backs onto them, is going to be demolished in order to sort out the floor heights – not a surprise to anyone that worked in that section.

While I had the camera out and it was a nice sunny February day, I took the opportunity to wander through the park and see what changes could be seen round the back of the site.  The first impression is not a lot of change – there’s some scaffolding in places but that’s about it.  So these photos document where it’s currently at, and hopefully can be then compared as work continues in the future. 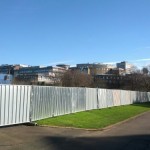 The long view from the park towards the back of TVC. The fence in the foreground is part of building work next to the park. 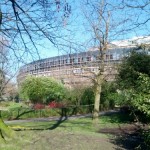 View across the part of the outer ring on TVC. 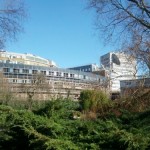 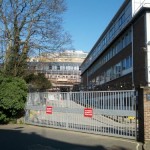 View from the Frithville gate up towards TC4 loading doors. Other than some additional scaffolding around nothing much appears to have changed. 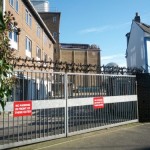 View from Frithville gate towards the Dodds Yard area and satellite dish farm.